You are here: Home / Conferences / What stories are you not telling? 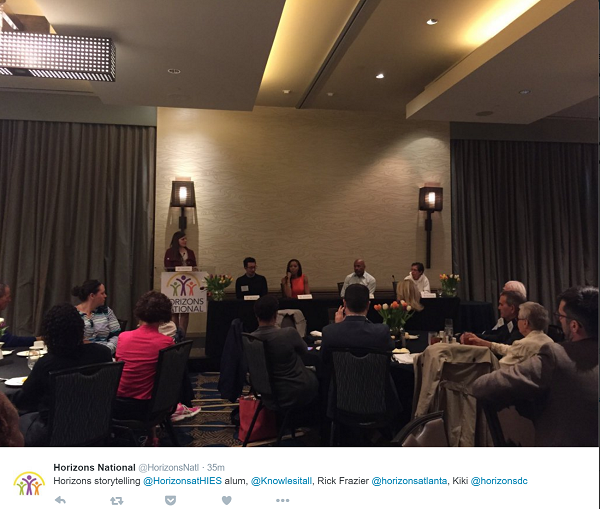 This weekend I had the pleasure of teaching a workshop and moderating a panel at the Horizons National Conference. In the picture above, you’ll see me on the podium along with my fellow panelists. Horizons National is a summer enrichment learning program and I have to say that after the stories I heard at the conference, I’m a fan! I heard so many amazing stories about how summer education programs are changing kids’ lives. All I can say is, WOW!

The panel that I moderated brought together different perspectives (an alumni, a teacher, a journalist, and a board member) to discuss how they could best tell the Horizons National story. Lots of great insights were shared, but there was one question from the audience that sparked a great conversation. The question was: What stores are we not telling that we should be telling?

Asking generative questions that include a “not” in them can be so helpful. So often we are focusing on what we should be doing, but by asking questions like this we can shift our perspective to pick up on our blind spots. During the conversation that the panel had, they mentioned that so often Horizons National focuses on telling stories about their educational programming and how transformational that can be for kids. But a fellow panelist mentioned that one of the things the kids look forward to the most each summer is swimming.

Now, on the surface swimming might seem completely tangential to their educational program. But it’s important for a couple of reasons. 1) Many of the kids who attend the summer programs don’t know how to swim, so they have the opportunity to learn this essential life skill. 2) Swimming builds their self-confidence and resiliency, which translates to their learning in the classroom.

The teacher on this panel, Kiki, told the story about one boy who tried to learn how to dive from a diving board for 3 summers. The year he came back and successfully did that, he told her, “This is the summer. I’m going to do it!” And he did. But later that summer he was struggling a bit with learning a particular math concept. But rather than let him get deterred, she reminded him of learning how to dive. While it took him a few years, ultimately got it. That gave him the confidence to keep going.

I heard several other stories like this about the swimming program, but it’s not as widely talked about and that’s a big missed opportunity.

As you think about your non-profit and the stories you may not be telling, I’d encourage you to think about the programs or services you offer that might be under the radar, yet have a tremendous impact. You might also think about stories about particular stakeholders or constituents that are not talked about as much.

« It’s here – The Storytelling Non-Profit Book!
Can You Find the Story Gold? »