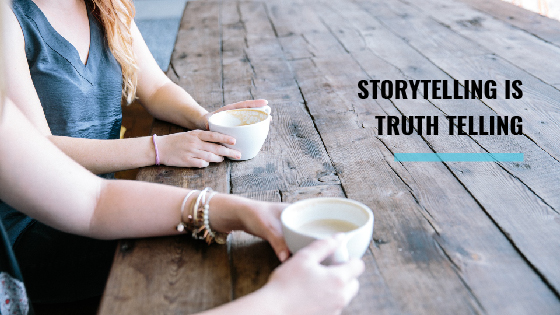 Why we need truth telling

There are many reasons we need truth telling in our societies and cultures. In the context of the work that many non-profits are doing, truth telling is a way to share injustices and start to work towards rectifying those injustices.

Storytelling is a way to shine a light on issues and experiences some people might not be aware of. It gives others a glimpse of another perspective. The step beyond that is using storytelling to catalyze support for your organization’s approach to solving that problem.

Without storytelling and truth telling, I often wonder what shape some of the major social moments of the 20th century would have taken.

The problems we encounter when truth telling

As I’ve said, the process of storytelling and truth telling often gives voice to a not universally true experience and that is what can make it so powerful.

But. . . but, what happens when people reject this new perspective?

Undoubtedly, there are times when rejecting a truth can be a good thing. For example, rejecting the perspectives of the white supremacists in Charlottesville is one way of keeping our social moral code in check. If we were to allow their truth to become society’s truth, there would be dangerous ramifications for many people.

And yet, there are far more instances when we reject people’s storytelling and truth telling for reasons of oppression.

In my experience of women’s anti-violence activism, I’ve noticed that people often fall into one of two categories. The first is the category of people who unequivocally believe women and women’s experiences. The second is the category of people think that women’s experiences are up for debate and judgment. We see the later all the time in high-profile sexual harassment and sexual assault cases, and it happens in non-high-profile cases, too. Women’s stories are torn apart in the media, by lawyers, by family, by people who don’t even know them.

Why? What a question.

In the instance of women’s stories of sexual harassment and sexual assault, it’s often a function of sexism and of prioritizing the “he’s good man” story over the woman’s experience. This is often talked about in college and university rape cases. You’ll learn a coach or family member say that a young man’s life is going to be ruined over one (just one!) misstep, and should that be forgiven? The message this sends is that somehow the woman’s life is not ruined, which is completely false.

One of the problems that I see a lot of organizations coming up against is that they have a loyal audience that actively acknowledges the problem(s) so they don’t need further convincing, but there is often another audience who may or may not be fully convinced of the problem.

When people’s truth is denied, it’s often a function of people not recognizing their own privilege. That privilege allows them the luxury of saying, “this problem doesn’t affect me; therefore, I don’t recognize it exists.”

Because of this, the question many of these organizations are grappling with is – should we spend time and resources trying to convince these other audiences that these problems are legitimate and worth solving?

At this point, I don’t know if I have a good answer to this question that every organization would find useful. To some extent, I think it varies from organization to organization based on their goals, resources, and so on.

I’d love to hear your thoughts on this topic. Leave a comment below and tell me what you think.

« Non-Profit Consultant and Trainer – What Is That?
Using Surveys to Assess What Your Audiences Knows »