You are here: Home / Non-Profit Storytelling Examples / How New Directions Youth and Family Services Uses Stories in Their Donor Newsletter 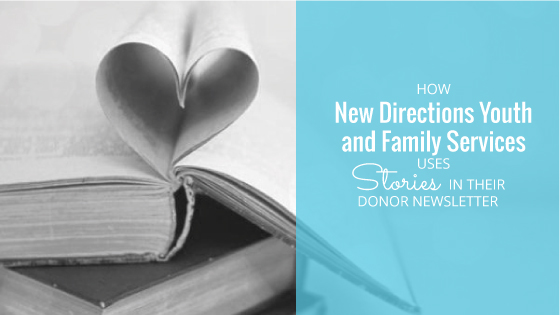 It’s always interesting to hear about how non-profits are using storytelling in their fundraising and communications. This year, we are starting a brand new interview series with non-profits about their projects. To kick off this series, we have an interview with Jeff Mendola, Director of Mission Advancement at New Directions Youth and Family Services.

In a recent email exchange with Jeff, he shared that segmentation was improving results from their donor newsletter. I wanted to know how, so Jeff has agreed to talk about project and share lessons learned.

Here’s what Jeff had to say.

“I am the Director of Mission Advancement for New Directions Youth and Family Services. We work with children facing emotional & behavioral challenges as well as their families in Western New York. We start with community-based programs that have a goal of addressing issues before the child has to be separated from their family. We also have a foster care program and 2 residential campuses for children who have had to be removed from their family. We also operate 2 group homes for older children as well as parenting teens with infants. We are a $24 million organization with more than 350 employees.

We trace our roots back to two orphanages, the Wyndham Lawn Home and the Randolph Children’s Home founded right after the civil war in the late 1800’s. These 2 organizations merged in 1999 to form New Directions.

I was hired 4 years ago to revive our fundraising after 5 years of no activity and continue the growth of our endowment. Our database showed more than 10,000 prior donors – some with decades of giving that stopped between 1980 and a few years after the merger.

For the last three and a half years, I have attempted to re-engage this rich pool of prior donors with moderate success. While I kept promoting the New Directions brand, since 99% of the people who knew of us continued to think of us as the Wyndham Lawn Home and the Randolph Children’s Home and didn’t recognize the New Directions name. I made sure to include information or a story about each of our programs and campuses in every newsletter and included donation envelopes that would be returned to their local campus.

During the 4th quarter of 2016, I tried something very different.

In October 2016, I mailed out 2,500 newsletters. This time, however, I produced two different newsletters rather than a shared one. My Wyndham supporters read about their campus as well as Foster Care and other stories of region-wide interest. They read nothing about Randolph and even the return address and program list features Wyndham Lawn. I did the reverse for Randolph. My tag line on the newsletter cover was either “The spirit of Wyndham Lawn lives on!” or “The spirit of the Randolph Children’s Home lives on!”

I told a story about each of our programs and limited the amount of general news provided. And for the section dealing with legacy gifts, or planned giving, I even used a story there about a recent gift we had received from a gentleman who had lived at our Randolph Home during the 1920’s. His father has passed away and his mother came to work there in the kitchen – bringing him with her.

After Thanksgiving, I followed up with a one-page year end appeal about Shayenne. She came to us straight from a drug rehab facility. She got involved in our extensive adventure recreation activities – starting with snow skiing. After a few hours on the slopes, they were returning to the lodge one evening. She turned to one of our counselors and told him that if she discovered skiing earlier, she wouldn’t have needed drugs. Quite the powerful story!!!

A very wise woman told me once to tell people what they want to hear – not what you want to tell them. They want to hear success stories about real people – not statistics and industry-speak gobbley gook. They want to know that they are helping real people like Shayenne – not some vague demographic like “homeless people” or “sick children.” When you use vague terms rather than specific stories, you open yourself up to the donor’s bias and prior perceptions – rather than what you are really trying to convey.

When I write a story, I interview the people involved and produce a first draft with how I’d like to tell the story. Then, I go back and let my interviewees review it for accuracy. I never use last names, even if I have permission. If I need to use “fake” names, I let the interviewee select it. If I can’t use original photos, I use stock photography and explain in a small footnote that I used a different name and photo to protect the person’s privacy. No one has ever perceived that negatively.

And don’t restrict storytelling to just newsletters and appeals. Last summer, 6 of our girls in residential care completed lifeguard training and received their certifications. They were featured in the local paper and several got summer jobs as lifeguards. I reprinted copies of the article and mailed then to several dozen of my “favorite” donors who had supported that campus in the past. I just let the newspaper tell the story, rather than myself.

A year before that, I sent impact postcards to hundreds of donors talking about how 8-year-old Julissa had survived years of abuse, thrived in residential care and just got adopted. Communicating without stories is like watching TV without a picture. No fun and not effective.”

If you’d like to read a copy of newsletter mentioned in this post, you can do so here.

Jeff – thank you so much for sharing your experience with storytelling and the powerful impact its had on your organization and donors. It really speaks the opportunities all organizations have to use stories to engage donors.

« 7 Questions That Will Help You Tell a Giving Story
Fresh Idea: Data Audit »