You are here: Home / Featured Post / Removing Barriers to Giving, or How Traditional Development Gets in Its Own Way

One of the things I’ve been thinking about a lot recently is how the traditional development model puts up a lot of barriers to engagement. In fact, this was something that came up in the Office Hours call with the Master Class students last week.

When I talk about the traditional development model, I’m talking about annual giving, major giving and planned giving. What some think of as the donor pyramid. In offices that have a combination of these programs, staff typically oversee what’s called portfolio management where they decide which donor prospects get to move into new giving opportunities. Before feathers get ruffled, I’ll say that I know that a lot of science and thought goes into strategically prospecting and moving donors.

Here’s what this model misses -- giving donors the opportunity to self-identify more frequently that they are ready to move to a new level of giving that may seem like a big jump from their current giving level.

But, what about donors who are ready to just get to the top of the ladder? Do we need to wait for donors (or even non-donors) to prove themselves to be brought into a new fundraising portfolio?

Yes, they exist AND it’s important from a strategy perspective to give them the opportunity to climb several steps of the ladder at once. This is called the elevator of engagement. You may very well have donors (or non-donors) who don’t respond to a $25 or $100 ask because they don’t think it will make much of a difference. Now, will these folks want to suddenly make a $100k donation? No, but there are mid-level and smaller major gift size asks we can make. More on that in a few paragraphs.

I learned about the elevator of engagement through a political organizing model called the Momentum Model. This is the model that the Sunrise Movement, If Not Now and Cosecha all use. In the politically organizing context, this model leans into the idea no matter what level of engagement people come in at, you can present them with opportunities for more responsibility as a volunteer and constituent. The increasing level of ownership and responsibility will be appealing to some amount of people and will result in greater capacity.

In a ladder of engagement model, for example, there would be many steps between signing a petition and organizing a local chapter of an organization. Yet, the organizations I mentioned above give constituents more frequent opportunities to get on the elevator to the top floor of this kind of engagement and it works.

PS - If you’re interested in experiencing how the Momentum Model works first hand, make a donation to one of these organizations (or sign up for their email list) and watch what happens. I did this with Sunrise last year and was really surprised by the engagement opportunities they sent to me as a new donor in the weeks after I made that gift. It's like nothing I'd experienced before in the best possible way.

Your organization may not do political organizing or advocacy, but there is a lot of inspiration here for turning traditional development on its head. Something I’m always interested in doing.

Recently I saw how Cosecha applied this to their fundraising. Cosecha has an ask on their home page for $1,200. 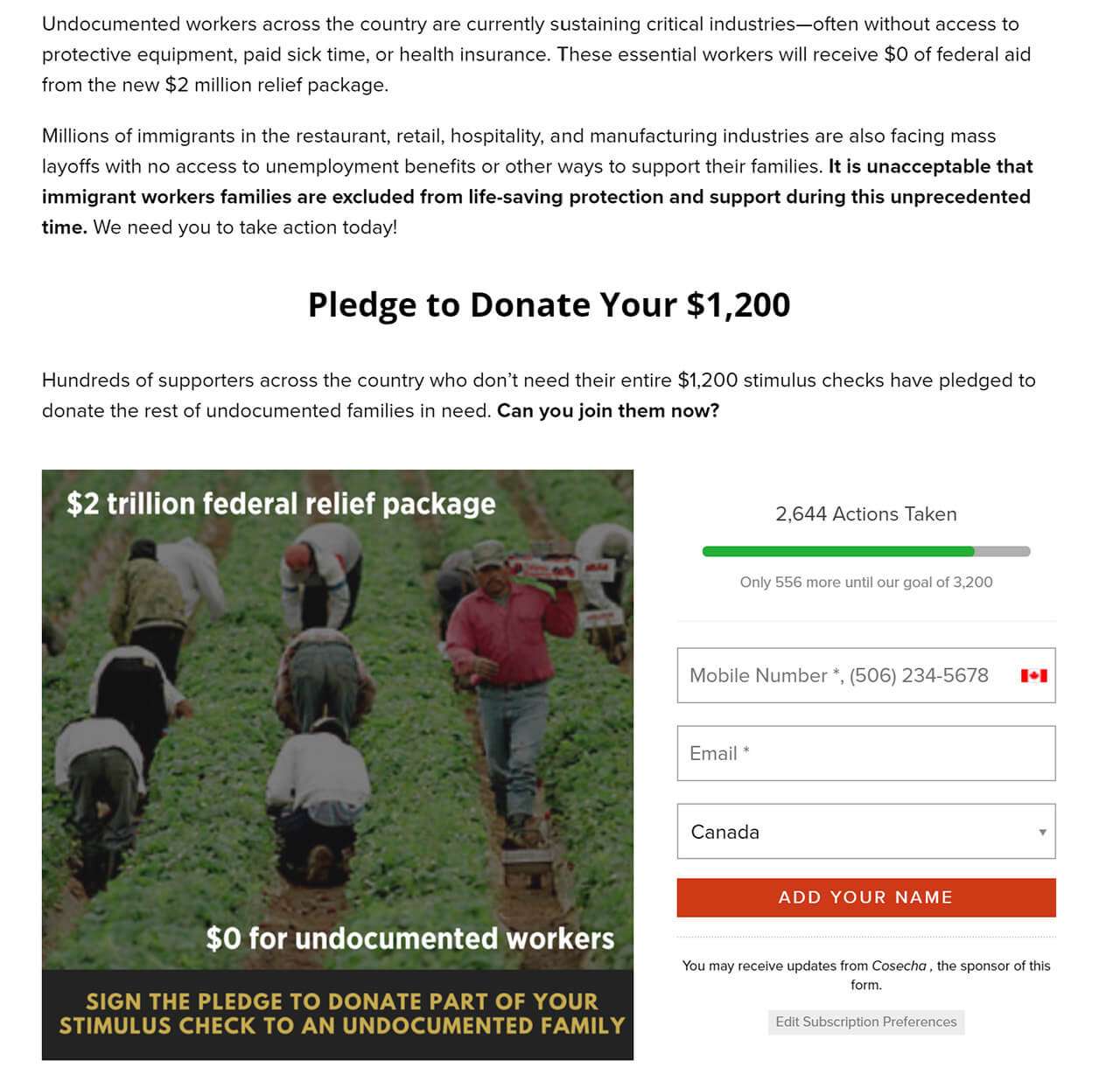 Now, there are a lot of reasons why this ask makes sense right now. In the US, folks received $1,200 stimulus checks and many wanted to donate their checks. For some of these people, this might be the largest donation they have ever been able to make. Many might be primed to make a large one time donation because they are excited by the impact it could have. These are folks who benefit from the elevator of engagement.

Should your non-profit replicate this campaign and ask for $1,200? That’s not the point so you can cross that off your idea list 🙂

The point is that finding a big ask that’s presented at the right moment with a powerful, clear reason for giving can be an elevator of engagement.

As we all hurdle towards year end fundraising, I wanted to share the concept of the elevator of engagement so that you can look for an opportunity or two to give donors the chance to take the elevator to the top. Don’t wait for donors and non-donors to prove their readiness for bigger gifts.

Will you see huge results? I couldn’t tell you for sure. But I can tell you that it’s worth testing, which is exactly what I’m doing with a client this month.

If you’re interested in the Momentum Model, their website is a great place to start. The book This is an Uprising is also an excellent resource that is a companion to their trainings.